The Big Fifty One 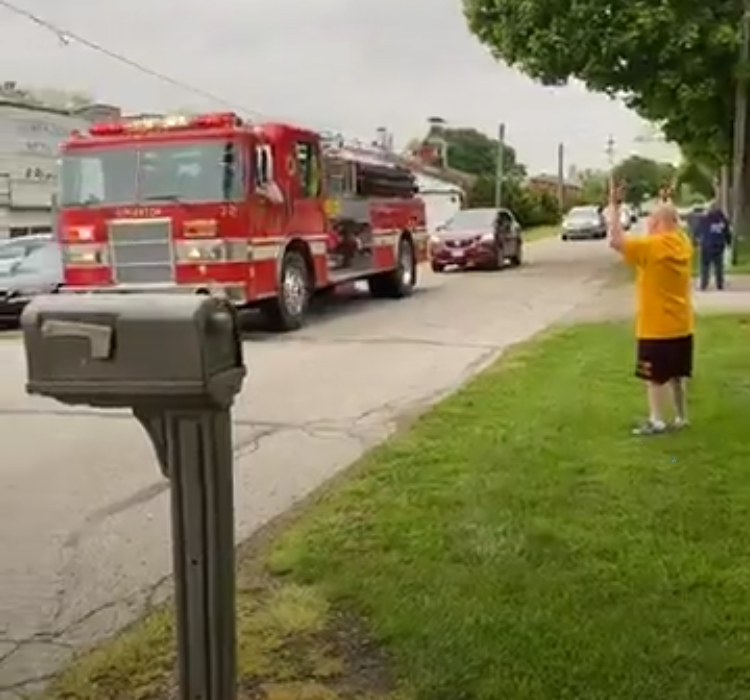 Well – he did it. He had another birthday.

Every year, in the early weeks of May, I have the same conversation with Steven regarding his birthday. I simply have fun telling him we are going to skip it this year. He takes on a somewhat serious tone and lets me know he will be having a birthday party.

So then I tell him – well OK, but no presents. He typically says something like “Yes. Presents.” Then I say – well no cake. He tells me to quit teasing. He says yes there will be cake, and yes, there will be ice cream.

On the other hand, I know adults who have a “birthday month.” They celebrate as much as possible, and I think they have a good thing going.

I was born a week before Christmas, so there has never been a need for me to arrange for more festivities.

Birthdays can be of great importance to us when we are children, and it seems we love to announce which number we have reached. When my grandson Thomas was turning five. he told people he was going to be “a whole hand” as he held up all five fingers.

When we are a child, we have that birthday “feeling” on our birthday. None of us probably have the words to describe the birthday feeling, but all of us know what it is. As adults, we find we can be going about our day and realize we are not even thinking of ourselves and the fact that today is our birthday.

If you have read any of my previous blog articles, you know I am finding a lot of old things tucked away in boxes, but the items in the boxes are new to us.

When my parents’ estate is finally sorted through, there will be relief but there will also be disappointment in knowing there are no more pictures to find. No more old newspaper articles to read.

I think I am down to maybe a couple more years’ worth of stuff to sort through. What will I do after all is sorted? I will have a stack of completed scrapbooks for someone to inherit, and I should have a lot of blog stories about my family, other families, old letters, old photos, and who knew – vintage birthday cards.

Steven’s 50th birthday party was in the school gymnasium. It was a grand event. He was turning 50. In his words “The big 5 Oh.” Many, many hugs were given that day. When you have Down syndrome, hugs are mandatory. Don’t think you are going to get away without a hug.

So, here we are, trying to enter the roaring 20s with this weird new vocabulary and new rules. I love to read etiquette books and the history of proper attire, manners, and such. It makes me wonder: what will history write about the days we are currently living through?

Last year there were hundreds of hugs for Steven. And this year – what is this strange thing he is being told about hugs? He has to be wondering what the world is coming to. The hug is the most important thing in the world and someone, somewhere, has decided that hugs should not take place.

And those virtual birthday cupcakes. Yum. What kind would you like? Chocolate or vanilla? We will be sure to send one to you. Don’t be concerned. They weren’t expensive, and a virtual cupcake can be whipped up in no time at all.

No problem with the virtual ice cream either. How about Steven’s favorite: twist in a dish?

So this year, Steven didn’t know why he took a lawn chair out to the sidewalk. He didn’t know we were waiting on a car parade to travel past his house. He could not have thought of a better way to spend his birthday, and he did not remain seated when he saw a fire truck was heading his way.

It was 7 pm, and we could hear the fire truck blowing its whistle just for him. He cheered the truck on.  He had to be thinking that finally the world got it right as he was witnessing some magnificent celebrating of his birthday.

And then there were cars behind the fire truck. Cars full of friends. Full of cousins. Full of well-wishers. He saw many birthday cards and posters and balloons and lots of cheering. The sound of the car horns was a fun part of his parade. The great nieces and nephews were in charge of walking out to the car to safely help collect his birthday loot.

Bringing up the end of the parade was his home-town police officer in a squad car. It just doesn’t get any better than this.

After his parade, he went inside to open his cards and gifts. He takes his time with tasks as important as this. I had the chance to check my cell phone camera to see what kind of footage I was able to capture.

I really was surprised to find an 18 second video in which I managed to film the green grass, the sidewalk, my shoes and others’ shoes, the sounds of laughter and sirens and finally I pointed the camera towards the firetruck.  The audio captures the fireman on his speaker – wishing Stevie Kimpel a happy birthday on behalf of the Edgerton Fire Department. Then the video ends right when I thought I started the video.

The next video in the camera is one second long. You can see the fire truck for one second.

The third video got it right. My hands finally captured six minutes of Steven and his birthday parade.

That was the second time that day in which I managed to not film something I thought I was filming. I think the correct word is something other than “film,” but an old vocabulary dies hard.

All of us know that anyone with Down syndrome knows the value of a hug, and if you study why a hug feels so good, there are some rather big science words that explain it. But none of us have to care about any of that. We just need to know that hugs are great for our health.

I remember when Steven was born and of course, we had a lot of fun with him as he was growing up. But it was only recently I realized he has a unique calling on his life.

I do not know why it took me so long to acknowledge that. After all, others have pointed it out.

He has dealt with his fair share of problems over the years, yet he goes on and has enough left-over joy to pass on to others. He would have a hard time telling us who his closest friends are. He seems to be close to everyone, especially those who are simply around him at the moment.

He has a way of making others feel special, and being in his presence can be a quick reminder of what is important in life and what is not.

Steven is proof that God has already factored in our limitations when He placed a calling on our life, and it may be that Steven’s calling is his ability to celebrate life and show others the best way to live life despite our problems – no matter how many whole-hands old we are.

In all probability, your local fire and police department are not going to bring a car parade to your home. If they do, you are likely celebrating a birthday with a whole lot of hands.

Please sit or stand safely at the side of the road and let the children collect your cards and balloons for you.

There is only one way to guarantee you will receive a hug – and that is in giving a hug.

One hug a day means you have collected 365 new hugs since your last birthday. If ever there was a collection of something we think we oughta be able to take to heaven with us – it would be our collection of hugs – for it means we have lived a life of genuine care for those we love and happen to be closest to at the moment.

Dementia and Disease – Let’s Cut to the Chase