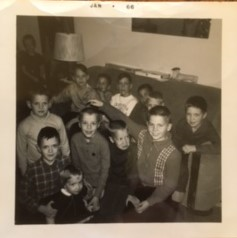 It’s odd how the definition of “old” changes over the years. When I was six years old, I remember thinking my 12 year old brother Don and his friends were quite mature. They were kind of worldly. They were already handsome. They could play sports really well. I looked up to them and knew someday I, too, would be 12 years old.

And someday I would get to be the mom. I looked forward to being the mom. I totally planned on driving a station wagon. I daydreamed about my polished nails, and I could envision my beautiful hands on the steering wheel as I drove my station wagon.

Funny thing is I grew up to be a woman who never wore nail polish, but I was a mom who drove a station wagon. It was a little mauve-colored station wagon, and I drove it back in the 1980s.

The subject of “old” came up the other day when my brother, Steven, was spending a Sunday with us. He was sitting on the family room floor, and when he started to get up, he groaned and said his knee hurt. My daughter Natalie told him he was getting old. In Steven’s comical way he replied, “Nooooo, I’m not old. My knee is old. Quit teasing me.”

He made all of us laugh. We confirmed with him that he just told us he is not old, and it was just his knee is old.

Steven appeared to be quite pleased as he confirmed that we finally understood that he is not old. It is simply his knee is old, and now we have it right.

I asked my grandchildren how it is you get old, and they told me you just keep living, and then you get old.

My mother was celebrating her 50th birthday at the time of the country’s bicentennial in 1976, and she was pretty proud of that.

Mom was writing human interest stories at the time, and she wrote about herself. She sent two of her young sons uptown to buy some birthday candles for her own cake. The boys brought the boxes of candles home to her, and she noticed they had purchased three boxes, each containing 36 candles. She said she had never talked about how old she actually was, but she found out how old the boys thought she was.

I found a diary in one of the boxes in my mother’s house. It looked somewhat masculine, so I thought there was a possibility it was my dad’s journal. The diary appeared to be locked, so I couldn’t open it quickly like I wanted. I took it home to find a key and hoped I had some good reading material waiting on me.

As it went – the diary was not locked, and all I had to do was push the button a little harder and in the right direction to make the little hook release.

Inside the front cover was a blank line to be written in by the owner. My dad’s cursive handwriting let me know the book belonged to “Vernon and Ruth Kimpel.” He filled in the “19” on each page with the numbers “54” which of course means the diary was written in 1954.

Apparently my parents had decided they would both write in the journal. Dad was the one who journaled for the first 8 days. I knew baby number 4, Elaine, was soon to be born, and they were already parents of Marcia, Ed, and Jayne.

Dad wrote about his work and who he was working for. On January 6, the kitchen addition was started by Nile and Clair. My brother Ed remembers it was Nile Goebel and Clair Pahl who built the “kitchenette.”

On January 7, Raymond Hamman’s baby boy was born in Garrett. It was nice weather that evening, and Mom and the children spent time at Grandma and Grandpa Imm’s house.

On January 9, Mom took over the journaling and wrote that Pauline Hamman came home from the hospital. Mom went uptown that evening, then down to her mom’s to get sheets and diapers Grandma bought in Auburn.

Mom may have taken the diary to the hospital with her, because on January 11, Elaine was born at 2:31 in the morning. 5# 1 oz. Bob and Luella visited in the evening, and Vern came over in the afternoon.

On January 14th, Mom wrote that Vern came to see her. Dr. Boerger made her stay another night because the baby’s weight went to 4# 13 oz. The kids spent the evening with Verda. Bill and Dolly were there.

Mom was discharged from the hospital on the 15th in the evening. Her mom was there, but the kids were with her sister Verda.

The next day Bertha and Gertrude Herman worked for them, and Grandma Imm came in the evening.

My dad’s handwriting was apparent for 8 days. Then mom journaled, and by December, there were only two entries: one birth and the death of a friend.

If you were born in 1954, and your parents were friends of my parents, it is quite possible my mother documented your birth in the diary. She wrote if it was a boy or a girl as well as the parents’ names. Sometimes the name of the baby, and even the baby’s weight, made it in the book. It truly was the baby boomer era.

Mom noted the date Elaine turned on her tummy in her playpen for the first time on June 2. She started to creep on July 26. This diary will be interesting reading material for my siblings.

My mother was known to state her life passed by entirely too fast, and many of us can relate. Suddenly we are old, and we don’t know how it happened.

We remember thinking 30 was old, and 40 was really old. 50 – those people have lived half a century and aren’t they considered seniors? 60 – the senior citizen discount card really does arrive in the mail. 70 – it’s hard to believe. 80 – beyond comprehension. 90 – there’s no longer any peer pressure.

My mother saved so many little things for us. Her collection is old, but I refer to some of it as vintage.

Mom and Dad started dating in September of 1946. They became engaged in April and married on October 4 of 1947.

You can tell she was busy before the wedding. Her journaling ended on September 19, and there were no further entries in 1947. So we do not get to read about the wedding, where they went on their honeymoon, or her life as a newlywed. If she were still here on earth, I would probably scold her a bit as she knows better than that.

My mother saved an invitation my brother Don received to his friend John’s surprise birthday party, which was held on September 26, from 2 to 4, at 207 Clarksville Rd. Although the year is not noted, we know the party took place in the 1960s. The boys were probably about 12 years old, and I may have been around six years old.

I also found an invitation with a picture of a “party line” phone. Mom was invited to a surprise birthday party on Monday, Feb 3, at 8 o’clock at Roy Sander’s home. The note says “Bring Vern, Ruthie.” I thought it was Margaret’s birthday, but according to Mom’s diary, it was a surprise party for Roy.

In my search through Mom’s saved newspaper clippings, I found the story of Roy’s party:

“Mrs. Roy Sanders gave a surprise birthday party for her husband Monday evening at their farm home. Since Mrs. Sanders observed her birthday Tuesday, the guests surprised her by singing, “Happy Birthday, Margaret.”

Mom documented in her diary on May 6th that she went with her good friend Pauline to Hamman’s house for a birthday party for Raymond. Vern stayed home and worked on the house, and his brothers LaVon and Russell were there to help.

My mother and Pauline were great friends throughout their lives, as the photos, greeting cards, and diary entries confirm. The two ended up having one last thing in common: they both lived to be 92 years of age.

I truly am thankful for the little bit of journaling my parents did back in the mid 1950s, and I am left thinking it is a wonderful thing to do for the next generation.

It seems easy for me to tell others, especially young people, to start a journal. Personal feelings and details can be left out of the journaling, and just little facts about how our day went and what we may have done are fun things to look back on.

So since it seems easy to offer some advice, I will do so: keep a little journal of the cute things your children and grandchildren say and the ordinary things you are doing. I love the fact my parents journaled the births of the children in their lives, along with the name and weight of the baby.

When we journal, we are simply writing a little treasure book.

Life is a gift from God, and it’s okay to document what His little masterpiece is up to. Perhaps our journals can help us focus on what matters. Perhaps we will see where our time is being spent, and we will love life and those around us even more.

Ephesians 2:10 For We Are God’s Masterpiece

DottingMyTeas Newsletter Signup Form
Signup below to enroll in our newsletter!

Dementia and Disease – Let’s Cut to the Chase