“Marlene Got Caught by a Cop” 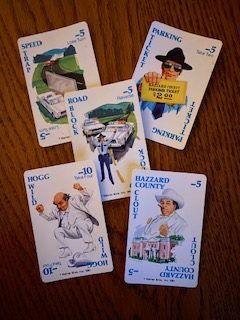 If ever you are driving along just minding your own business and a police officer decides he wants to tell you how fast you are going – I highly advise you have your younger brother who has Down syndrome in the car with you.

A few weeks ago, Steven had a dentist appointment, so I drove to the next county to pick him up at his work. It was a winter day – but it was sunny. The roads were clear. Skies were blue. I was in a good mood. Steven was in a good mood.

He hopped in my car and was telling me about his day. He said something comical when he told me his cousin Collene was wound up last night. She dropped something on the floor, and I was trying to figure out what he was telling me. All I knew was it was a funny story.

Then this white car with lights on top of it goes by. I was heading west out of town. He was heading east into town. I felt like I was already in the country, and it didn’t feel at all like I was going too fast.

But suddenly it felt like I was going too fast when I looked in the rear view mirror and saw red and blue lights turn on. The cop car was turning around. My first thought was to thank God that Steven was with me – I knew he would be the most handy of passengers I could come up with.

When I pulled the car over to the side of the road, I told Steven that I was getting pulled over because I was probably going too fast. He was able to watch in the rearview mirror as the car with flashing lights pulled up behind my car.

Steven is a bit of a rule-follower when it comes to something like the law, and I could tell that he was seeing this as a serious matter. It occurred to me that I may receive a ticket or I may not receive a ticket – either way – Steven was going to have a story to tell. And he will tell everyone.

So the officer asks me for my license, registration, and proof of insurance, and we waited while he completed his work. The officer then came back to my car and smiled as he told me to slow down and have a good day. It seemed to me at that moment that he was a very nice young man.

As we were driving away, I told Steven that it’s OK – I didn’t get a ticket. I knew he understood that was a good thing, and we could relax and talk about it. Maybe even laugh.

We weren’t too far down the road when I told him that he doesn’t have to tell anyone. I told him it was a secret. He knew from my tone that I was joking, and he told me that he is going to tell everyone.

The more I joked with him and told him it’s a secret – the funnier the conversation became. I knew he would get a lot of mileage out of what just happened, and he was proving to me that I was going to be right. He was doing his best to tease me. He told me that I give him a headache.

We were late for Steven’s dental appointment – but never fear – Steven let everyone in the waiting room know we had good reason to be late.

That evening, he went to his Special Olympics basketball game and told his circle of friends that Marlene is OK. Marlene is alright. Marlene got caught by a cop. But she is going to be OK. I was told that his story caused a few smiles.

So the next week – Steven had an appointment with his chiropractor. And as we were driving out of town – he told me not to go too fast. He asked me if I remembered what happened last week. Then he said, “Ticket. No. No more.”

I did a little charades-like move of a speeder leaning over the steering wheel, and he really laughed. He told me to stop it and be serious. He reminded me that I do not want to get a ticket.

Steven and his friends like to watch re-runs of the Dukes of Hazzard® television show. I never found the show to be humorous except when I am in the company of Steven or someone who sees the humor in it. Then it can be appreciated.

I was talking to my daughter Teri about the Dukes of Hazzard®, and she told me she had never heard of them. So I looked them up online to find the show was described as an American action-comedy series which aired a total of 147 episodes from 1979 to 1985 – so it was before her time.

Apparently my daughters never watched a re-run of the Dukes of Hazzard.® The next time Steven is over, we may pop a DVD in – and I know with great certainty that Steven will find it to be funny – which will make the rest of the family laugh.

So I challenge you to watch a few minutes of this old series, and if you don’t find it funny, invite Steven or one of his friends over for a pizza party and movie night – and you will see the humor in it.

Same thing with The Three Stooges.® Suddenly that show can be funny when it is watched with those who appreciate that kind of humor. It makes you realize the talent it takes to make a show such as that.

Who said life is serious? You don’t have to take life so seriously. You knuckle head.

Speeding Ticket Disclaimer:  If you are going to drive and not think, you will likely be issued a speeding ticket when you are told you are going faster than you thought. You do not have Steven in the car with you – so please remember that.

If you drive in Hazzard County or any county you are not all that familiar with, please be mindful of how far out of town you must be before you are allowed to put your foot on the gas and drive faster.

There are these things called speed limit signs that tell you when you may increase your speed.

The police officers are very nice nearly everywhere you go – but they have a job to do. They are human too, and someone with Down syndrome tends to melt the hearts of all around them. Steven has gotten two of his sisters out of speeding tickets.

Please remember some people get away with high-fiving the cops around them – but that is not likely you. So please obey the parking laws and all. You are likely not going to get out of anything just because you are not taking things so seriously. You knuckle head.