“We Both Succeeded, Yet We Both Failed” 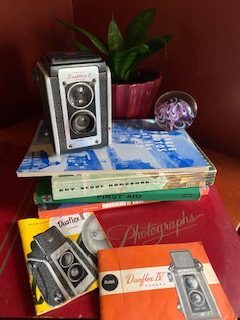 My grandchildren were due to visit for the afternoon, and I was cleaning in my bedroom – which is on the far end of my house. I turned off the sweeper and thought I heard a car door, so I peeked out the window to see my daughter had indeed arrived with my two grandsons. They were already exiting the car.

I didn’t want to miss the greeting at my front door – so I took off rather rapidly to get to that part of the house, thinking maybe I would have the chance to jump out and startle them.

I didn’t know Thomas had the same thought. He was heading through the house like an 8 year old does.  He had the same intention – he wanted to find me first.

We unexpectedly found out where the other one was as we were rounding a corner between the living room and dining room. Both of us let out a bit of a startled kind of gasp. Neither one of us had a chance to purposely scare the other one – because we were being scared. It made both of us laugh.

Thomas wanted to know if he scared me. I had to admit he did scare me. A little. He laughed and said I got him also – but just a little bit.

So his mother walks in the house, and we told her what happened. And after she heard the story, Thomas summarized it with the sentence – “We both succeeded, yet we both failed.”

I had to write down what he had just said so I would not forget it – for it is known we think we will not forget what children say – but we do.

His words made me wonder if there are times in life we succeed – yet we fail. And if that is so – when? I decided to just sit back and live life and the answer will someday be before me.

In the mean-time, I realized both of us admitted to being just a ‘little’ scared. That must mean there is some kind of scale in which we can rate the scare. There must be a ‘medium’ scare and a ‘large’ scare.

When the large scare happens – we usually admit it – for someone was likely a witness to it. Or possibly it scared us so badly we find ourselves telling others what happened.

I have a friend who very much dislikes being intentionally scared by others. Her family always knew they best not do it to her – because it will not end well.

And I can appreciate where she is coming from – sometimes it’s just aggravating. They are asking our emotions to go from just having the daylights scared out of us – to laughing with them.

As long as no one gets hurt – and that’s a chance many of my nearest relatives have been willing to take – they are hoping for a good laugh and a funny story to tell.

And then there are the fears that are unique to children. Things like sleeping outside in a tent seem like a grand idea until darkness arrives. The outdoor monster or animal of some sort could possibly be lurking close by and the decision to head indoors for the night is made.

My grandchildren are sometimes too frightened to venture into other parts of my house by themselves – even during the daylight hours.  Just where the monster may be at any given moment seems to be a mysterious thing.

There is this thing about the upstairs attic in our house – it is a walk-in attic with a thing or two that make it unique. Hanging on a peg on the attic wall is an old mask. The mask seems to be scary – yet fun – to the grandchildren. They often want to go into the attic to see what’s in there and dig around – looking for something from long ago they may be able to claim as their own.  But the only way they will walk into the walk-in attic is when an adult opens the little door, turns on the light, and goes first.

We have noticed the youngest grandchildren are starting to let the oldest cousin take on the role of the brave one and lead them through the door.  If anyone wanted to scare them good – the attic provides lots of opportunity.

Deano needed to wash his hands the other day, and he wanted me to stay with him while he stood on the footstool at the bathroom sink. When it looked like he was almost done, I started to walk away. He told me not to leave him – and he finished with a look of urgency on his face – dried his hands as quickly as possible and dashed into the other room where he could join others.

I could relate to Deano’s fear because as a child I thought a wolf lived in my parents’ bedroom closet. It was a very real thing to me. The wolf was probably there during the day – but I knew for sure he was there when it was dark out. If someone else was in the bedroom with me, the wolf would probably leave us alone. But if I were to go into the bedroom by myself – surely the wolf would get me.

I asked Deano what color the monster is in my house, and he said ‘brown.’ So I imagine the monster has fur, and it may look somewhat like a wolf.

Isn’t it odd we grow out of our childhood fears – yet adulthood brings on a whole new set of fears – and those fears are unique to each person.

Sometimes when I am searching through our family photos from long ago – I am reminded we are all visitors to this time and this place. We are just passing through. It is probably safe to say most of us see time spent with old friends and new friends and close family and extended family is of great importance.

Sentimental value is an interesting thing. I have a salt and pepper shaker that belonged to my grandma and grandpa Imm. When I pass by that little boy and girl sitting on their own little bench – I think of my grandparents – and I have a mental picture of this little kissing couple sitting in their home in Edgerton. But no one else does.

A friend of mine once pointed out that estate sales and auctions are full of little what-nots that once had sentimental value to someone – and their treasures end up in the hands of strangers or in an antique mall. He really made me think, and since that time, I look at items on this earth somewhat differently. There is a little story behind most collectible items.

There are so many things God put on this earth – things to do, things to see, things to make – apparently He knew we would need lots of gifts to get us through life.

Way back when I was a hospice nurse – I had more than a few conversations with people who knew they were close to the end of their life. Very often – I heard stories about how they lived out their days and how the many items, trinkets, and what-nots came to be collected.

And the generation of women I was taking care of often referred to their collections as ‘dust-collectors.’ Things like antique thimbles, toothpick holders, and hens-on-a-nest fit right into the décor of their home.

Years ago, Genevieve Youse and her daughter Jacque, paid an afternoon visit to my home. Genevieve’s Uncle Martin and Aunt Clela Holt were the owners of our home before we moved in. And Genevieve had great memories of spending family time at our house.

It truly had never occurred to me until writing this story – that so many friends and family left me with a few things that will never leave me – their hugs, kisses, and thoughtfulness. We know we were kissed more than a few times as a child and a kiss is a forever thing – a true gesture of love and care and concern that cannot be taken back.

In our later years – we can more easily question why we had such an interest in earthly things. Why do we collect ‘stuff?’ But I would often point out that items we collect along the way might just be a sign of a life well-lived. We are simply intrigued with the things God put on this earth, and very often the collected items served as conversation pieces or could have been used to teach or nurture others.

My aunt Isabel was someone to watch when she greeted a loved one she had not seen in a while.  Isabel would put her hands before her – steady the face and plant a good kiss on the cheek. She had an unbelievably pleasant personality, and her smile was contagious.

So while we are here on this earth – we get to do a little cherishing – our co-workers, our friends who go to lunch with us, our cousins who grow up with us, our aunts and uncles who love us, our grandchildren who remind us, and even strangers we can greet or hold the door open for. God put others in our path – for our own life and in our own time.

The Success and Failure Disclaimer:

There is this thing called life we are meant to take part in – every day. God knows all the perceived failures and successes we will encounter along the way.

He is there for all our burdens – the little scares, the medium scares, and even the monsters and scary things that frighten us so badly we end up admitting it was truly a large scare.

We should remember to give thanks – for we are fearfully and wonderfully made. He has put brilliant researchers on this earth who can also tell us what we need not fear. That body of ours – and that oh-so-germy

earth – He did it right.

It is known that only a few things are truly contagious – so be careful how you live out your days – we wouldn’t want anyone to catch a case of the giggles – all because of you. Or heaven forbid – we do not want them to report a contagious smile.

A kiss on the face these days? It is known to be good for you – but be careful – once you give away a kiss – it can never be taken back.