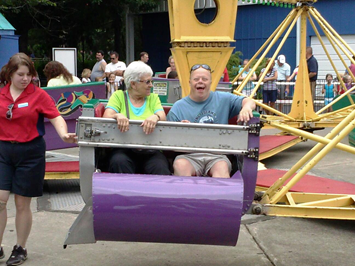 It was father’s day, 2011, and my husband and I were at King’s Island amusement park with family. And I accidentally took my little brother Steven, who has Down syndrome, on a rather large roller coaster.

I still do not know if we were hood-winked on purpose or somewhat by accident, but two certain family members told us this roller coaster had ‘little waves,’ and they made a motion with their hands – knowing we really did need sign language in order to understand. They said we would love it. And Steven and I believed it.

He had been on many other rides that day – mostly in the children’s section of the park – and it seemed he had been more willing and courageous to try out new rides as the day progressed.

By evening, we were at the front of the park and had time to go on a couple of rides before heading home. There was no one waiting in line to step on to this coaster. And since we couldn’t see the ride, we did not know that the first hill, and the rest of the coaster, was actually huge.

So we crawl into the seats of the train, buckle ourselves in, and I hear the recording of a woman’s voice announcing the coaster reaches speeds of 61 miles per hour.  I say aloud “61 miles an hour?” and I heard my daughter Natalie, in the seat behind us, say the same thing.

But it was too late, we were buckled in, and our little train, which was in a pavilion area, took off, made a U-turn, and proceeded forward on the tracks. We emerged out of the building and into the daylight, and we get to see the true height

of the roller coaster.

And as we started the slow climb up this wooden and rickety-sounding coaster, I knew my little brother had only a few more seconds to imagine what was about to happen.

Steven looked up the hill and said, “It’s OK Malene. I’ll be alright.” He tightened his grip on the handle bar in front of him as we headed up the hill.

We’ve all been there. We forget how bad those coasters can be. Our little train took us slowly and oh-so-nicely to the top of the hill and then cut loose like a roller coaster does.

I was reminded of everything a roller coaster has to offer as we encountered the hills that seemed way too tall and the tight curves that were rather unnecessary. The people who engineer those coasters to intentionally scare the daylights out of riders – do a mighty fine job.

Amusement parks have a way of bringing out the screams in us – but Steven’s primary coping measure throughout the ride was in letting me know we were going to be OK, and it was going to be alright. His look ahead was rather intense and the grip on the bar remained tight. There was deep concentration on what was ahead and there was no way he was going to fly out of the train if the strength of his grip had anything to do with his body remaining in the seat or not.

And all the while it seemed he was still able to take care of his sister by verbally letting her know all was going to be OK.

So when the ride was over, and our train came to an abrupt stop, I remember thinking I had just gone through the strangest two minutes of my life. Steven was so weak he could not physically step off of the ride.

Jon and Natalie got him on the ride. They had to get him off the ride. Thankfully, we saw a smile on his face. It was a high-five kind of smile.

Since Steven appeared a bit wobbly and weak-kneed, Jon and Natalie got on both sides of their Uncle Steven, and helped him like you would a wounded soldier who needed support from two others. It was a cute scene, and we noticed others around us were smiling at the three of them.

It wasn’t long before Steven began laughing. And laughing he did. He laughed until he cried. He made the rest of us laugh.

Jon, Natalie, and Jon’s grandmother, Novella, said they too could hear Steven’s words of reassurance during the ride. And our tears, which came from our laughter, continued in the car as we traveled back to Natalie and Jon’s house.

Steven sat at the dining room table that night and asked for a piece of ice cream cake before heading to bed. He learned how difficult it is to swallow food when you can’t stop laughing.

So the next morning, I did my usual awake-before-everyone-else-in-the-house thing. I had time to type an email draft to my nine brothers and sisters to let them know we have a new roller coaster rider in the family.

As I was typing, I remembered we were told at the time of Steven’s birth he has a heart murmur – and although he had no heart complications over the years – it occurred to me this could have been the end of him. And what if he doesn’t wake up this morning? What if the stress had been too much?

Steven slept in the basement that night. Thoughts raced in my mind he could have been so affected by the stress of this ride maybe he will just pass away in his sleep. How was I going to explain this to my family?

And just about that soon… I saw the basement door knob turn, and the door open – and the great roller-coaster rider emerged with his famous smile. And I was off the hook – he truly survived.

I told him I had already written an email to our siblings to tell them the story. He told me to hit ‘send’ so his family could read about his excellent adventure.

Our family replied to my email – with most of them reporting they thought the story was going to end by learning it was a dream.

Steven made sure he had a King’s Island brochure which showed a map of the park and a drawing of the “The Racer,” which will go down in history as the one and only coaster he will ever ride – because, after all, when it comes to roller coasters, we can be fooled once, but not twice.

When we delivered Steven home to his mother – he showed the brochure to her, and we told her the story of his new experience. Steven was one happy guy, and Mom reported he seemed happier in the days that followed.

He has told his roller coaster story to many people, and to this day, if you ask him about that roller coaster ride, he gives a shortened version of the story which is simply an impersonation of himself on the coaster.  And he still makes us laugh.

Steven’s story could perhaps make us think that a happy life is just a string of happy moments – we may have to tighten our grip at times, roll up and down the hills at times, scream words of support at times, let our family and friends help us when we need a shoulder to lean on, laugh with food in our mouth, and know a happy life could possibly come simply from letting life happen.

It’s Not Hoarding If It’s Plants