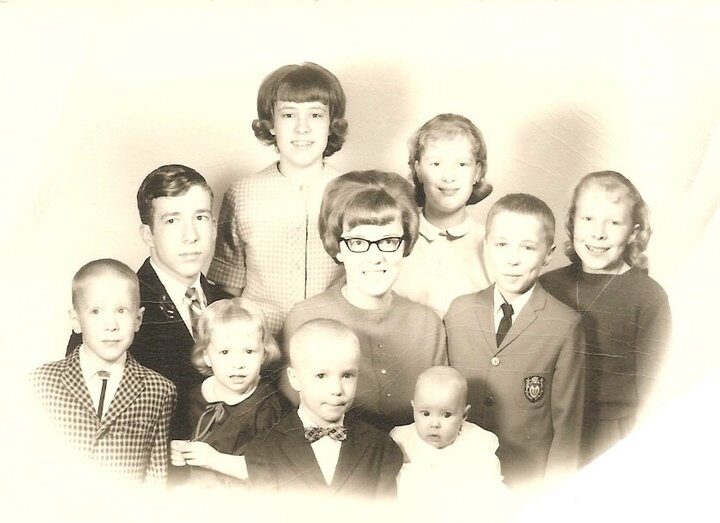 I have them. Four of them. And with the sorting through of a lot of boxes of family photos and memorabilia from my mother’s estate – I’ve been reminded of things I have forgotten.

Appreciation of our family seems to happen more so in adulthood, and having fond memories from childhood is something that should be on our list of things we can be grateful for.

The property my parents purchased in 1947 ended up being a place where a lot of ballgames were played. In front of the garage was the basketball court. The side yard had a small baseball diamond. Mrs. Hug let us use her yard as the outfield. There were a few trees that were just right for climbing, so we did.

And baby buggies, bicycles, big wheels , and stilts made their way up and down the front sidewalk. My dad made stilts for us, and I can still walk on them.

My family has a great collection of black and white photos, and I noticed it was somewhere around 1967 when the pictures are in color. Steven was born in 1969, and most of his baby photos are in color. My oldest brother Ed is not in a lot of the color photos, because he was the photographer.

I think most of us have had times when we are bummed out and can’t think of much to be grateful for. I laugh at myself, because I have actually googled “things to be grateful for.” More than once. And honestly, most of the things that I read were just too simple and thus were no help.

So I recently made a gratitude journal out of an inexpensive three ring binder with a piece of heavy copy paper in plastic sleeves. The pages in the binder now hold my collection of some of the notes and cards that I have received over the years as well photos and items that are meaningful to me. Possibly it can be referred to as a scrapbook for cheaters.

I can only wish I would have started this journal many years ago – because I have already found it’s truly a fun moment when I realize I have another item I want to add to the notebook.

One of the things I have always felt grateful for is the fact that I cannot remember saying good-bye to my brother Ed when he was entering the service. He was in the Army for two years – and would come home when granted a leave. My older sisters have told me it wasn’t any fun each time they had to say good-bye to him.

I do, however, have a memory of the day he came home for good. And for that I am very grateful. My sisters had made a large welcome home sign that was in our front yard. I also remember yellow ribbons were tied around trees back then – because the service men were starting to come home.

I was going through a box of saved newspapers when I found a letter mixed in the stash, and it was a letter that Ed had written to Jeanette while he was in the service. He wrote it on her 4th birthday. I imagine it was really hard on him to be the big brother and miss the little ones who he had been helping to raise.

Marcia wrote a letter and told me that you were going to have a birthday. Is that right? Well Eddie didn’t know what to buy you, so I’m sending you some money. You can put it in the bank, buy some clothes, or whatever you want. You be sure to write me a letter and tell me what you did with it, okay? I’ll be home to see you and Marlene in a few weeks, so be good girls! Bye – Eddie

Jeanette and I stayed with Grandma and Grandpa Imm when my mom and dad went to the airport to bring Ed home. When they arrived back at our grand-parents’ home, and Ed walked in with his Army uniform on, I was so glad to see my big brother.

But Jeanette was five years old, and she took off to hide. We could see her blond hair from behind the end table. Once she decided to come out, it didn’t take long for her to warm up to her older brother – who was very ready to just hold her.

Both of us had very shiny and soft blond hair. My hair was straight, but there are a few photos that show that Jeanette had wonderful little curls around her ears. And we often had matching dresses on. In the letters that I am finding – it was all about the two little girls.

My brothers-in-law did tell me that one of their memories from their dating years was the great fun they had with the two little sisters. Apparently there was lots of laughter and giggles.

I was so young when my brothers-in-law joined the family – that I do not remember life without them. So when my oldest sister Marcia passed away, I thought about how hard it is to lose a sibling, and you really don’t want to lose their spouse also. And thankfully Jim has stuck around as a member of our family.

In the eyes of my older brothers and sisters, Jeanette and I are still the little girls – and the first time Ed heard my grandson call me ‘grandma’ – he said it seems odd anyone on this earth is referring to me as a grand- mother, because I am the little girl of the family.

It is really odd that one requirement for becoming a grandmother is you first have to be a little girl.

I remember one evening in my parents’ home when my older brothers were playing in the bathroom, and one of them threw a wet washcloth and set off a fire alarm.

Apparently my parents had instructed their children to go to the neighbors’ house and ask them to call the fire department if the alarm goes off. So that’s what two of my sisters did. They took their assignment seriously, and they ran to the Wickerhams’ house.

This happened on a Monday night – when the firemen were already gathered at the fire hall for a scheduled meeting, so they were able to respond really quickly to a reported fire at the Vernon Kimpel home.

My dad was at a village council meeting when this happened. This is one of those times I wish my dad were here so I could ask him how he learned the fire department had been called to his house.

My two sisters who ran to report this were apparently just the right age to make something like this happen – they were simply doing what they were told to do by going to the neighbors’ house and asking them to call the fire department.

Jeanette and I were the little sisters – did anyone stop to make sure we got safely out of the house? No – they just ran without us.

I can remember times I had been very frightened by something – but this night was not one of them. I may have been confused by what was happening, but I remember it was a very exciting evening.

If anyone should have been frightened it would have been the neighbors who answered their door and were asked to call the fire department – Warnie and Odelia were their names, and they really were great neighbors.

Back in those days – you had to use a rotary phone. You didn’t want to be nervous about it because if you made a mistake when you were dialing the number, you would have to start again. And Edgerton’s phone exchange numbers has 8s and 9s in them.

Then after you did successfully make the call to report a fire – the village siren alarmed. And you could hear the siren throughout Edgerton until someone uptown answered the call and relayed the information to the volunteer firemen who were driving quickly from their home to the fire hall.

I was outside in the front yard when the firetrucks arrived. I have a very vivid memory of what those firetrucks looked like. Three trucks lined up. Lights flashing. I can even remember the sound that those trucks make as they idle.

Uncle Clair and Grandpa Imm happened to be there, and they took care of talking to the firemen and letting them know the story.

Since the men were already gathered at the fire hall on the night of the house-is-not-really-burning-down fire – the firemen themselves were able to answer the village fire alarm phone. In the 60s, you couldn’t call the fire department and say, “never mind.” The trucks are going to show up at your house if you call them.

I imagine it was great relief to them when they found out they did not have to battle a fire. It was just practice for them that night. And not too much fuel wasted to drive a few blocks from the fire hall to my parents’ home.

I am not aware of a written recollection of what had happened that night. So this could be it. What I am leaving for you now may be all that posterity will have.

As we continue sorting through my mom’s saved memorabilia – we are finding newspapers that we comb through to see why she would have saved that particular newspaper. At times it is a bit of a puzzle. At other times you can find yourself smiling at what you just found.

There are articles about friends and family, and we wonder if those who are in the articles would like to have the newspaper.

And just reading the ads in the paper provides a little history about the way things were and the items that we used – like stereo turn-tables and console televisions – and what it was going to cost us back then. The ads for new cars are especially interesting.

One thing we do know is that the photos and letters are helping us remember what we were doing and what life was like so many decades ago.

My mom was known to say that the only complaint she had about life was it went too fast. And she lived to be 92 and a half.

My parents never had a large bank account – they just never concerned them-selves with building up wealth. My dad was known to fix things ‘for free’ for people who were in need – especially in his retirement years.

And my mother decided to give her car away to the local Senior Center after she told us the traffic in Edgerton was too much for her to continue to drive – and those at the center would appreciate being able to go to their appointments in a car rather than the center’s van.

Maybe one of the best things about getting older is we become clear on what does and does not matter. I know from reading my mom’s diary that she and my dad had plans for a wonderful life together, and like many from their generation, they had a tendency to focus on what matters – and their giving spirits were very apparent.

The same basketball court is still being used by those who want to shoot a few three-pointers with Steven. Their dining room table would now be considered retro – and many of the items that are in the background of those photos remain in the house to this day.

Photos are a funny thing. They are capable of capturing just a little moment in time – yet a single photo can show us what the most important things in life really are – the people, the places, the feelings, and the smiles.

DottingMyTeas Newsletter Signup Form
Signup below to enroll in our newsletter!

Family: No Returns. No Exchanges.