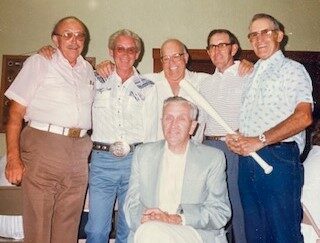 Many of us know what it is like to sort through an estate, and conversations with others who have been there and done that, can be interesting. The discussion tends to lean towards what we are finding and what we are throwing away.

There are those who saved hundreds of twist ties or dozens of glass jars. Mesh citrus bags – certainly they were going to use them someday for something. Bread sacks aplenty. Canvas shopping bags will be used by those who are packing up the estate.

But it is my mother who saved the most newspaper clippings. I’m sure my father would have saved some of the articles, but my mother was over-the-top when it came to saving newspaper articles, greeting cards, and children’s homework or artwork – just to name a few categories of her collections.

I have heard myself say I would rather have her collection of newspaper articles than not have it. And although I may have thought to myself that I did not sign up for this project, I knew the sorting of my mother’s paperwork would someday, literally, land in my lap.

In an effort to down-size her collection, some of the boxes traveled home with me, and I have found I am reading everything. I read the article, then turn the paper over and check the backside for anything of interest. And if she saved the entire newspaper, I read the entire edition.

Reading and sorting are two different things, of course. Reading is fun. Sorting is not fun. Reading doesn’t make a mess. Sorting makes a mess.

After the reading part comes the sorting part and the inevitable question: What to do with the articles and photos? Are these piles really necessary?   Rubbermaid boxes with family names on the outside? What’s a girl to do with all this stuff?

If you grew up in Edgerton, I have likely seen a picture of you in one of Mom’s newspaper clippings. Not a recent picture of you, just me recently seeing a picture of you. You got married back in the day, and I know what kind of flowers you carried. I have read the description of your veil and wedding dress. I know the songs that were sung and who the musicians were. I have read about the attendants.

I even know what the mothers of the bride and groom selected as their attire for the day. Apparently it doesn’t matter what the fathers wore as there was never mention of the guys. Maybe there is no need to describe the men’s attire. All a guy has to do is show up in his suit or tux, and he looks good.

Just when I think it is okay to throw an article away, I see a few words which make me think I should save it. Steven has even poked his hands in the wastebasket and saved a photo or two. He recognizes people in the photos, and he then has a reason to visit and give a newspaper clipping to them.

Mom was a writer. I now wonder if she needed to keep written words because throwing the article away would be like throwing away memories. Anything documented in black-and-white helps us remember, or should I say helps us never to forget.

In digging through her boxes, I discovered my mother wrote a poem she entitled “Ode to Homecoming, 1971.” Not only did she take the time to write about the town homecoming, she rhymed her words. I have to admit I was pulled into this writing thing, but rhyming – how did she do it?

What’s shocking to me about these newspaper articles is figuring out how many years ago it was. It’s probably not polite of me to point out that 1971 was 50 years ago. And I recently learned my 40th class reunion will be held this year. I had to stop for a moment and do the math. Weren’t we just kids the other day? Now we qualify for that 55 and over thing.

So here I am – reading Grandma and Grandpa Imm’s newspapers, accepting the fact I am now a third generation owner of saved newspaper clippings, and if I do not sort and toss like I should, woe to the next generation.

Certainly the fourth generation needs to experience this. They will say to themselves, “Well this is from 1910, we can’t throw it away.” Then they will say, “Who can we give this to?” as they start tossing the stuff back into the plastic tote from which they found it.

And oh, the worst thing to find is an unlabeled photo.  Poor me. I want to know the story behind the photo – who they are and what they were doing.

My brother Ed and I were laughing about the funny things people write on the back of photos – things like “I thought you would want a photo from the reunion” with nothing else. No year. No names or places. In my parents’ collection of black-and-white photos is one labeled with the name “Me.”

Quite possibly the labeling of our photos would be a good winter project.

I have found one properly labeled photo I feel inclined to share, not only because of the Edgerton names and faces, but because it is a wonderful reminder that the information on the back of the picture can tell a story and allow others to enjoy what was going on the day the photo was taken.

Someone with legible handwriting tells us this picture was taken at the surprise 65th birthday party for Bob Nester from Bryan on August 23, 1986 at the Bryan VFW Hall. Bob was a 40 year member of the Bryan VFW Post #2489. Standing left to right is Gene Radabaugh, Webb Nester, Sherm Cape, Marvin Radabaugh, Bob Nester (holding bat), and Wendell Robinett (seated).

Those in the photo are “ole” former baseball playing buddies. I love the way their hands are upon each other’s shoulders. I can only imagine the genuine hugs and handshakes that took place on the day Bob found out he was going to celebrate his birthday in a grander way than he had thought.

Perhaps there is a newspaper clipping somewhere out there about these six men who gathered to spend some time together. One thing I do know – photos such as these are a reminder of a couple of the greater joys in life: the human connection and the love between friends.

A great scrapbook caption for this photo may be words from the 1970s song written by Andrew Gold: “Thank You for Being a Friend.” The lyrics point out that friends travel down a road and back again. Their hearts are true. They are pals, and they are confidants.

Friends are not ashamed to say they hope it always stays that way. Their hats are off. Won’t they stand up and take a bow?

And if they threw a party and invited everyone they knew, they would see the biggest gift would be from “Me” and the card attached would say “Thank you for being a friend.”

If it’s a car you lack, they would surely buy you a Cadillac. Whatever you need, any time of the day or night.

And when they were older with walking canes and hair of gray, have no fear even though it’s hard to hear, just stand close and say, “Thank you for being a friend.”

If you need a little more help getting this song stuck in your head for the day (for I know you were singing this song in your head just a moment ago) pull up the lyrics and find that it ends with a thought about ascending and seeing you there once again.

It’s true our memories can fade with time, so my wish for you is the gift of finding a photo such as this, along with a story written in black-and-white, to take you back in time and remind you of how they loved and how they lived their wonderful lives.

Seated in the front is Wendell Robinett. In the back row from left to right: Gene Radabaugh, Webb Nester, Sherm Cape, Marvin Radabaugh and the guy celebrating his birthday, Bob Nester, is on the far right, holding a baseball bat.

Tags: baseball, birthday, estate, friends, newspaper clippings, newspapers, thank you, thank you for being a friend