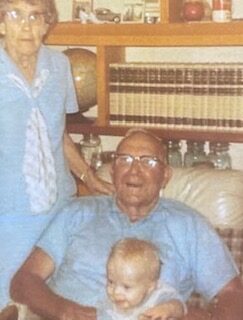 I would imagine nearly all of us own a box that contains items we plan to keep. The box is often tucked away in an attic or a closet, and it holds little treasures that bring back memories from long ago.

It would be fun to throw a “box party” and tell everyone to bring their box. We would take turns lifting the items from within and telling the story behind them. Love letters would certainly be the most interesting, but I would settle for a greeting card or two.

My grandma Imm signed her cards with “Grandparents Imm.” I remember receiving a white purse as a birthday gift from her and Grandpa. The purse was so fancy, I probably only carried it to church, so it is still in perfect condition. I wonder where she purchased it.

And then there is the little hinged recipe box found in nearly everyone’s kitchen. Every time we read a recipe card with a handwritten list of ingredients, we are reminded that a special person in our life had taken the time to share something good from their own life. More often than not, they have written their name on the upper right hand corner of the card.

I wonder if the exchange of recipe cards will soon become a lost art as the electronic world has changed the way many things are done.

My recipe box is fun to thumb through, as it takes me back in time. There are recipes from old friends and neighbors as well as people I used to work with. The cards will remain in my box – there for the next generation to find.

I found my Grandma Imm’s handwriting in a 1958 children’s book The Lookies, which is a publication for the World Book Encyclopedia. Grandma Lula was apparently helping her oldest grandchildren with answering the questions, and the book was divided by the months of the year.

If Grandma were to spend a day with me, and I gave her a tour of my house, would she be surprised to learn there is no sewing machine in my home? Would she ask where my embroidered dresser scarves are? I would have to show her the two embroidered scarves I own and ask her if she remembers making them.

I would talk to Grandma about those bread wrapper rugs she crocheted. I loved the crunchy sound when they were stepped on and the feel of them beneath my bare feet. I can only wish Grandma would have taught me to crochet. She knew how to embroider and tat, and I wonder how many children she shared her talents with.

She would likely marvel at today’s appliances and cars. She would wonder where my huge garden is and ask to see the root cellar. I would show her the glass cookie jar that once belonged to her.

I would probably ask Grandma if I could take her to Sauder Museum for the day where she would likely feel very much at home. It would take a lot of time to stroll through the museum as she told me how things were back then. She would probably ask why ladies are dressed the way they are these days.

I would tell her that by today’s standards, she would certainly be considered a fashionable lady who looks very put together – a “fashionista” they may call her. Pictures from long ago reveal just how cute she really was. I would tease her about the tiny waistline she managed to hang on to all the days of her life.

Grandma and I would likely spend some time going through her box of letters that date back to the early 1900s, and I would read the letters to her and ask her to tell me more.

She was around when serious family farming was going on. When the men gathered in the fields for a day of threshing, and the women cooked the meals. She was a young lady during two world wars, and became a grandmother who found out what it was like to send her oldest grandsons off to the service in the 1960s.

After a conversation such as that, I would tell Grandma that life on earth sometimes seems so odd to me. I would not ask her why life is full of so many ups and downs, and highs and lows, for I know she may answer with, “Beats me.”

My guess is she would likely tell me I am catching on with each passing year. If I told her how many mistakes I’ve made, would she tell me everyone makes a boatload of mistakes?

Maybe she would tell me life on earth doesn’t offer a brand new start, but it does offer a chance for a brand new ending.

Grandma may likely tell me what matters is how gently we lived. How giving we were and how gracefully we let go of the burdens we were not meant to keep. Words that were never meant to take up residence in our heart need to be allowed to fly away.

She would remind me I was taught to pray on my knees, and I should lift my eyes when answers seem so far away. Someone is still on the throne.

Would she tell me I am being held like when I was little? That none of us are alone, and we can close our eyes and feel the embrace and love of those who went home before us?

Three of my grandparents held me when I was a baby, but I was never held in the arms of my Grandpa Kimpel, who passed away just weeks before my parents were married. I can imagine he would have held his grandchildren very tightly, just as my dad did with his grandbabies. Grandpa would have lifted me and held me like his sons did.

Our grandmothers never saw the age of electronics. They never heard a child say, “Hey, Grandma, turn it off and turn it back on again, and see if it works.”

Our grandparents, however, knew that people work better when they unplug for a while. They knew enough to be outside, walk barefoot, and embrace the dirt. They delivered their babies at home. They prepared homemade meals and gathered around the supper table. They and their friends drank from the same cup in their one-room schoolhouse. They enjoyed time on their front porch – just breathing. They loved each other, and they loved their families.

My mother didn’t keep just one box of sentimental and important items that have become conversation pieces for the rest of us. No, not just one box. Maybe 50 boxes or so. Maybe 100. But who’s counting?

Those who sort through collections of saved stuff will undoubtedly find a few handwritten recipes and notes and will cherish the handwritten part. They may never use the recipe, but they will indeed marvel at their grandmother’s handwriting.

We know we “can’t take it with us,” but I wonder if we take our talents? Is there crocheting and tatting in heaven? Do we teach others in heaven?

If it’s true we take with us things we’ve stored in our heart, then our hearts certainly need an ongoing purge of the negative things we “Daresn’t ought to keep,” as our grandparents would have said.

It’s a funny thing: Just when we think we have shooed away negative thoughts, we find they’ve welcomed themselves back in again.

God tells us we are beautifully and wonderfully made, and He’s heard the compliments we’ve received along the way. He made our beautiful eyes and our funny noses. He made our hands. And He even made our pinkie toes. He knows what is in the little box within our heart.

Certainly He loves to see that the electronic boxes have been turned off and would never tell us to turn them back on. If He were to spend some time with me, He would not ask for a tour of my home, for we would be too busy checking out the items stored within the box.

As I lift each item from my collection, I could ask Him to tell me more: Is it something I should keep or let go? We could read the love letters I had forgotten He had written to all of us.

We don’t have to look far to see His handwriting. It starts with the sunrise and doesn’t end at sunset. The moon and the stars can be such show-offs in the night skies. Sometimes the crescent moon is golden and sometimes it is white. Sometimes we can see the moon’s face and laugh as we tell others we really did see its funny nose the other night.

God doesn’t have to prove how majestic He really is – but what about those beaches? Without a doubt He knew we would love the feel of the sandy beach beneath our bare feet and the sound of the waves crashing in. It even occurred to Him to dot the beaches with seashells, knowing we would certainly want a souvenir as a forever reminder of a beautiful place we once spent some time just breathing.

Eventually our box becomes full of conversation pieces that remind us of little adventures we’ve had along the way and the fact we really did have a good life.

If Wedding Vows Were Realistic