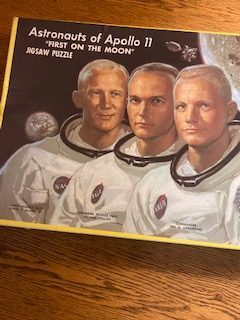 It’s midnight. And I should not have so much energy. I should not want to crawl out of bed and write. Just stay in bed – I told myself.

Everyone has experienced the mind-racing thing that makes nodding off to sleep a bit difficult and not so much fun.

There I was – willing to give myself permission to crawl out of bed and do some housework. The same housework I couldn’t get done all day long – I wanted to do at midnight. Dusting furniture. In the dark. Great idea.

I stayed in bed and tried to think of anything pleasant. The moon had been so pretty out the west window, and I had texted a few friends earlier in the evening to tell them to look at the moon.

Thinking about the moon ended up being a mistake as more than a couple of friends had recently told me their take on if we really went to the moon or not. I did not want yet another reality of mine to leave me. There have been too many changes in the way I perceived the world, and I could not afford another loss emotionally or mentally.

So I told myself it may be best to quit thinking about the moon. There is a dream waiting to happen. I would be an astronaut who made it to the moon in my astronaut suit but found out there was not enough fuel in the rocket to make it home.

I wondered how the scientists knew how much fuel to send along back in 1969 so the men would make it to the moon. Then they needed enough fuel to get back. I have claustrophobia just typing this.

I can’t imagine calling the family to let them know there is not enough fuel to get home. Who wants to go to the moon and find out you can’t get back. Then what do you do?

You call the President, and he will talk to you on his land-line phone. He will certainly send a rescue team of some sort, and all will be well.

I remained in bed and thought of all those newspaper clippings my mother saved about the moon landing. And I have some moon landing picture cards I found in my parents’ home. I texted a photo of the cards to my friend, and he said he had also received the cards back in the 1970s after sending for them from wherever it is you send for cards in the 70s.

Then I wondered what kind of camera the astronauts had. If I went to the moon, I too would want to take a few pictures. Did they hold a camera up and push a button to take a picture of the other guy? How did that work with the gloves the men probably had to wear?

My vintage moon landing cards show a background of darkness and there were no stars. I would have had a problem with being a bit bummed out while I was at the moon, and I know I would be home-sick.

One of the cards shows the American flag placed into the dusty moon surface.

In antique stores everywhere are those 1969 moon landing drinking glasses with a depiction of the moon walk. Certainly these glasses are further proof we  went to the moon and back. And the puzzle at my parents’ home. The three astronauts. The box clearly states the astronauts were the first on the moon, and it was Apollo 11.

So there I was. At midnight. And I am wondering how the space craft landed on the moon. There was no run-way so it had to be a gentle landing – kind of like how a helicopter lands. The pilot lowers his space rocket slowly and nicely onto the moon’s surface. How did they slow down enough to do that?

If I were an astronaut, I would be frightened there could be a rough landing. After all, the astronauts did not have any practice landings. Did they? Certainly if the landing ended up being a rough one, the big white suit would lessen any discomfort.

And I thought about the picture of the rover – apparently they needed the little car to manage the terrain on the moon. Getting the rover out of the rocket was probably an easy part of the job – like maybe there was a trap door of some sort for the little buggy to drive out of. How far did the rover travel on the moon? What about the gravity thing?

Certainly we still have the rover in a museum somewhere, and I could plan a trip and marvel at it and have my questions answered.

So there I was. At midnight. Wondering how they made their rocket blast off from the moon so they could make it home to their families. Weren’t they scared? If it were my job to go to the moon, I would probably tell my boss maybe they ought to find someone else.

Quieting of my mind was not to happen that night. I tried all the good little tricks I knew in order to get to sleep. So out of bed it was. I went to my computer and did an online search for a good moon landing picture book. No luck so far.

Another option is to simply ask questions of the men in my life, and if they are stumped for answers they will do some research and get back with me. After all, I’m a girl who pays no attention to anything mechanical and even after I learn how an engine or car works, I won’t remember it.

I knew at an early age my interest was in phonics, spelling, and the alphabet. But I really do marvel at those who have the ability to fix things. And farmers – how do they do what they do and know what they know?

So if you are wondering about my conclusion of this matter, I likely will not spend time researching anything sciencey. Nothing farming. Nothing construction. You will not find any answers from me. I just listen to friends say we went to the moon or we didn’t go to the moon.

However, if you would like to hire me as a journalist and send me to the local spelling bee – oh the story you will read later! The excitement. Certainly pleomorphism and exosomes have been added to the words the students might be asked to spell correctly.

The world simply needs to stop cancelling important events such as the spelling bee and think we are going to accept attending everything virtually.

Just because we watched the virtual moonwalk from our living room on a black-and-white television does not mean we want to spend the rest of our lives watching everything piped into us.

But germs – isn’t it freeing when we remember humans always have, and always will, share real germs that help us maintain wellness. Just like they tell us the moon has a terrain, our bodies have a terrain.

Real germs are part of the clean-up crew made within our own bodies – by design.  Our bodies know what to do. But I have heard that virtual germs are not so good.

Thankfully there is no “fireman theory” in which the firemen are mistaken as the bad guys at the scene. Firemen are the good guys, of course.

But oops! Look what happened to germs and what was said about them decades and even centuries ago. Germs are made by our own body. We are made of bacteria. Germs are called in to do their wonderful work, and they have been mistakenly treated as the bad guys.

There is no need to study “fireman theory.” But great news – germ theory and terrain theory – how freeing it is to discover these theories and start reading and studying.

It is safe to say the Creator knew health would be easy. It is humans who are complicated.

Those who live in nursing homes and extended care facilities are staying in their rooms and experiencing the huge loss of separation from their families and are in desperate need of hugs and kisses. They need in-person conversation with those they have loved throughout their life.

There is this thing called homesickness and yet another thing called failure to thrive. And our precious loved ones are beyond bummed-out – they are truly suffering.

Rocket scientists were apparently confident there was enough fuel to make it home and knew there would be great value in real hugs and real kisses once they made it back to earth.

It has been decades since we watched a virtual moon walk, and if it happens again, we will sit in front of yet another screen and this generation will get to see today’s version of a moon landing.

Two of my favorite words are “nighty-night,” and when my grandchildren stay overnight, I get to hear those words.

If I were a moon-landing kind of astronaut, I would radio back to earth and tell you nighty-night, and remind you that you are being loved from the moon. I will let you know we are blasting off in the morning, and all will be well.

When I am safely back to earth, there will be no more need for virtual hugs, and I will bring you some moon dust.

In the meantime, sweet dreams and go to sleep. Please. It’s midnight!