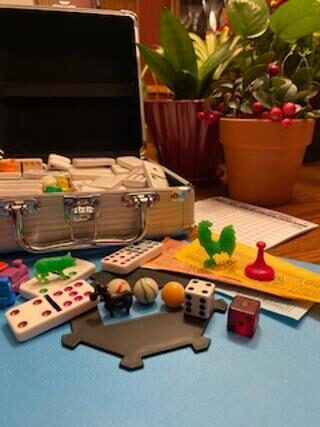 I remember playing a board game called LIFE® when my daughters were growing up, and I recently discovered the game again after finding it at a resell shop.

A few weeks ago – a group of my friends were speaking about life in general, and the topic of this board game was brought up. And we decided that a game about the world we live in could be called “The Rabbit Hole.”

We laughed as we decided that some people would start to play the game and stop playing it as soon as they learn what they got themselves in to. Many would simply choose to put the game into the trash can or sell it at a garage sale. And others may leave it on a shelf – knowing it is there, and they may decide to play it later if they think they could handle it.

Those who continue to play The Rabbit Hole game would do so possibly to learn more and maybe make some decisions or life-style changes – because this game could lead to wellness.

An alternative to The Rabbit Hole board game would be a game called the Head in the Sand game.

But surely the characters that make their way around the board game would be shaped like little ostriches with their heads in the sand. It really is a fun game to play. Our troubles seem so far away – and we don’t have to be aware of the many things that are going on in this world.

Speaking of operates, another great game for those who do not want to play The Rabbit Hole game may be the Operation® game. Playing the fictional version of this game is certainly good for us – for it would mean we have likely turned off all the electronics and are spending time with each other. The fictional game causes laughter.

But in real life – it’s quite unfortunate the players are rarely given the chance to draw a card or two that would give them an opportunity to change their diet or life-style. The real life version of this game has a reputation for revolving around the Not Informed of Alternatives card.

The only good card that may be drawn in this game is the Non-Elective Surgery card – which would happen only after a few unfortunate moves were made. Sometimes life gives us a trauma card or a rare birth defect card. Others find they have been playing the game long enough that they have accrued too many bad cards and the Non-Elective card is now in their hand.

If the Non-Elective Surgery card is drawn – we then find we have the Thank God card in our hands as truly skilled and brilliant people are stepping into the game and making  great things happen in the operation room.

Unfortunately the Elective Surgery card is often drawn – and players do not know this card will make them travel down Connect the Dots Road . It seems their support beams were removed from the bridge that now has to be crossed, and they didn’t know they would likely draw the Back Pain card and the Digestive Issues card.

A card that is seldom drawn in this game is the Digestive Enzyme card. That card would be a valuable one – but it would be too educational, so the creators of this game made it a rare card.

The Regeneration of Joints card is rarely drawn, and the Natural Anti-Inflammatory Ways card is a gem that is rarely chosen – mostly because the players do not know it can be chosen and have not learned there is strategy in these games.

Big losers in The Rabbit Hole game would be the processed food cards, plastic bottled water or unfiltered tap water cards, pesticides, herbicides, perfumes and cologne cards, fabric softener and detergent cards, non-organic anything cards, toxic ingredients in cleaning supply cards, styrofoam and plastics card, harmful ingredients in make-up and suntan lotion cards, and the list goes on. But those same cards are ordinary playing cards in the Head in the Sand game.

In addition to the Go to Jail card – the Spray Your Lawn card would be implemented.

Winning cards are plentiful in The Rabbit Hole game and would include Essential Fatty Acid cards, minerals, vitamins, collagen, essential oils, real food, colloidal silver, amino acids, CBD oil, sauna, monthly chiropractic visits, laughter, scrapbooking, journaling, plants all over the house, hugs and kisses, sunshine, time outdoors, time with children, and the many gifts God placed on this earth for us – too numerous to list.

The Book in Your Hand card is plentiful in both games – but the authors vary greatly.

The “Dis – Ease” card would be a losing card in any board game. These body-ain’t-at-ease cards are numerous in the Head in the Sand board game. Some players in this game become owners of their problems, and others decide to keep it a secret for as long as they can. But you never have to get to the root of the problem.

The Check Engine light is on – but it’s a simple fix when the mechanic just puts dark tape over the light, and he will issue the Symptoms are Masked card. We get to drive away after unloading some of our play money. See you in three months because the Check Up card is now required.

The mechanic will issue warnings about this stack of cards – he is supposed to inform the players they are now more likely to draw the back-fire cards. But more often than not, the players unwittingly will choose the Exhaust Problems card, Stones in Odd Places cards, Upset Balance cards, and the dreaded Clogged Hoses card. Then those odd-ball Domino Effect cards end up in our hands, and we can be startled when things just pop up out of nowhere.

But no worries – players just make more appointments, and the new set of breakdown can be masked just as easily as the first set. The game really gets fun from here – as we draw the Iatrogenic card, the Idiopathic card, and the Exponential Side Effects cards.

We can always choose what games we would like to play in life. We can choose to give up the My Body is Falling Apart card, and go play another game.

Many of us have found that we like to have dessert while we are playing our games – and we’ve learned how to pop a Humble Pie into our little toy oven. There are plenty of recipes all over the internet – that are found by searching for ketogenic recipes. One of my favorites is the Keto Blueberry Cobbler card.

There is the Learning Curve card and some studying when you play these games.

Some of these board games require a change of life-style – but it is a wonderful thing to see our player move towards health. And we don’t end up giving away too much of our wealth. The players are stepping into wellness and away from illness as they implement strategy and study.  And all generations should be included.

My own mother was 87 years old when she asked me if she could start the wellness game. She was so happy to be a player – she couldn’t play the game fast enough. She started playing her cards right and lived comfortably for another 5 years – passing away quite peacefully at the age of 92.

She had drawn the Staying Home for Lunch card. She learned how to make great organic salads with an array of good-for-you toppings and salad dressings. She learned the value of nuts and seeds on her salads. She had been misled in her previous game when she held the card that said No Nuts or Seeds for You.

My mother educated herself and found the Real Food card – and she was back in the game with the valuable food God placed on this earth just for her. And she turned that No Nuts card back in to where it came from. It was a good thing she was a bible-believing lady and learned what is in the very first chapter of God’s book to her.

She didn’t know there was such a thing as Grow Your Own Sprouts card. She said those little sprouts tasted like something straight out of her garden from years ago – so she loved it when a jar of sprouts found their way to her refrigerator. She could put sprouts on her salads and sandwiches and even blend them into her smoothies.

She learned the value of a pastured egg as well as meat without hormones and other things in it. She said she just couldn’t believe the difference in the taste. And she decided her printed money had more value when she placed it in the correct corner of the board game.

Next thing she knew, she had the Blood Sugars will Normalize card in her hand. She knew there was a bonus card such as that one – but she didn’t expect it to happen so quickly in the wellness game.  She had a list of physical complaints that left her body, and those around her were in disbelief.

Mom was amazed at what the Chiropractor Monthly Adjustment card did for her. She was not about to give that card away but was willing to offer referrals. She was winning the game and thought enough of her friends to give them a chance to catch up with her.

She also drew the Get off 6 Medications Safely card and weaned herself from the need for prescriptions at the age of 87 – after a 20 year run. The key word on that card is ‘safely.’

At the age of 92, bragging is not something we often get to do – but she drew the Bragging Rights card. She was a person who had a purpose. She would often ask if there were other 92 year old women who got out of bed to help their son pack his lunch and get on the morning van to go to work.

It may be safe to say that my mother – who had raised 11 children and never drew the wonderful Empty Nester card – had an ace in her back pocket – and it was the ‘No Excuses’ card that only she could play.

So there you have it – are you too old and set in your ways to make any changes?  Are you too old to play the wellness game? I’m afraid whatever card you have in your hand – may be trumped with the ‘No Excuses’ card.

Disclaimer Card: You already know you have drawn the Educational Purposes Only card, and you have not drawn any kind of treat, prevent, diagnose, or cure card.

You did draw the Smart Cookie card, and you know you should not make any moves or changes on these board games – and in real life – without the advice of your chosen health care provider.

Further instructions can be found nearly anywhere – but please read the Extreme Study cards and Informed Consent cards before you advance go.

“We Both Succeeded, Yet We Both Failed”