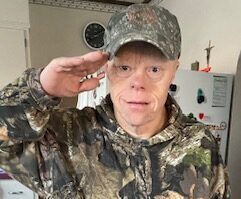 When my younger brother Steven was born 52 years ago, I didn’t really know what I was in for. I knew he was going to be special, and in looking back, that’s all a six-year-old needed to know.

As an adult, I knew the day would come when I would be spending more time with him. At least I hoped that’s how things would play out.

Steven’s older brothers and sisters started taking care of him after Mom passed away. It seemed all of us were trying to figure out how to make this new way of life work. In an effort to make the house into Steven’s home, there were lots of boxes headed out the door to be donated elsewhere.  Steven would often inspect the items in the boxes to make sure he was in agreement with what was being given away.

Months into our cleaning project, a Sunday morning came when he was home alone, and he couldn’t find his camouflage jacket.

What do you do when you can’t find a missing jacket? Apparently you report it missing. “Stolen” is too harsh a term. Why isn’t the jacket hanging in its appropriate place in the appropriate closet? Maybe someone took it home in her car.

My family, like many, has never had the need to call the cops on another family member or friend. Being a good citizen, never in my life would I have dreamed that someone would call the cops on me. But because I have a brother with Down syndrome, I can add that to the list of quirky things that have happened to me throughout my life.

Ask yourself: Has anyone ever called the cops on you? Thankfully the police officer who responded to the call handled it just as we would have expected. It was my brother Ed who told me later that my name was mentioned as the most likely suspect.

For the record, the missing camouflage jacket was located the following spring when a camper trailer was unlocked for the season, and someone’s jacket was found hanging safe and secure in the closet. It was nice to hear the case had been solved after months of wondering where that jacket might be.

I must admit that hanging out with Steven is fun most of the time. He makes people laugh and smile over topics that aren’t really all that funny. Not even interesting.

There are times he laughs until he cries. Falling down stories are funny after it’s determined no one was hurt. We have our roller coaster story and getting stopped for speeding story. There are fishing stories and three-pointer basketball stories.

Hugs are aplenty when you’re around Steven.

My mom and dad often talked about their concerns for him after learning he was going to be special. They were told by a “specialist” that Steven’s 10 older brothers and sisters would not accept him. Mom and Dad wondered what their friends and family would think and if their son would be accepted by those in the community.

After years of watching how much he is cared for by the people of Edgerton and the surrounding towns, it’s safe to say the specialist had no special knowledge of anything special whatsoever.

My mom saved a handwritten letter they had received from Sister Raphael, a teacher at our elementary school during the 1960s. She wrote a letter to them just two weeks after Steven was born.

Her words were encouraging as she pointed out that God had entrusted Steven to a family “so rich in love that you’ll care for him so beautifully. So let’s thank God again even though it might be with tears in our eyes.”

What we didn’t know was the man Steven would grow up to be and how he would make people feel special when they are in his presence. He has a way of reminding us that things that seem so important can become not so important. Plans for the day? Meeting up at an ice cream place might be more important than your plans.

He doesn’t want others to go without a hug. Or two. He likes to “hang out.” If there is something fun to do, let’s go do it.

My mom and dad were never able to experience any empty nester years. Mom used to point out that not many women who had reached the age of 92 are still getting out of bed early in the morning to see their son off to work each day. She made his breakfast, packed his lunch, and managed all the little details of his Special Olympics schedule. She kept track of the community ball game schedules and helped him find transportation to those games as well. She deserved a trophy for being the oldest living woman who could do all that on a continuous basis. But then the trophy would have been just one more thing she needed to dust.

His brothers and sisters have taken over the role of keeping him safely in the house that has been his home for 52 years. Now others are helping him with the things Mom and Dad used to do.

I was in the kitchen one morning when I turned around to find Steven with his camouflage jacket on and a salute for me. He let me take his picture.

The words in Sister Raphael’s letter pointed out the tears in our eyes. Thankfully, God gave us tears of joy and laughter as well as the tears we know all too well when we are feeling sad or overcome with emotion.

Family and friends who are older than I remember the tears that were shed way back when and the reasons they were shed. Now we know that over the years, the tears shifted from the sad kind of tears to the laughter kind of tears.

A salute to those who are taking care of others hardly seems enough. And a trophy – what better object that needs to be dusted could be handed to you? A trophy represents the hard work, coaching, and skills needed as we play hard. Or not so hard if we decide that going out for ice cream is more important.

We’re all going home someday, and all we need to know is that our team won.